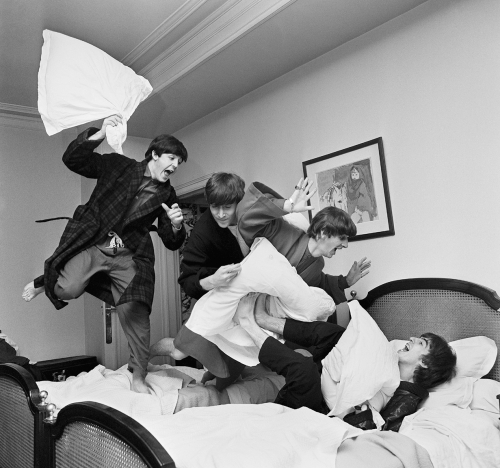 Harry Benson didn’t want to meet the Beatles. The Glasgow-born photographer had plans to cover a news story in Africa when he was assigned to photograph the musicians in Paris. “I took myself for a serious journalist and I didn’t want to cover a rock ’n’ roll story,” he scoffed. But once he met the boys from Liverpool and heard them play, Benson had no desire to leave. “I thought, ‘God, I’m on the right story.’ ” The Beatles were on the cusp of greatness, and Benson was in the middle of it. His pillow-fight photo, taken in the swanky George V Hotel the night the band found out “I Want to Hold Your Hand” hit No. 1 in the U.S., freezes John, Paul, George and Ringo in an exuberant cascade of boyish talent—and perhaps their last moment of unbridled innocence. It captures the sheer joy, happiness and optimism that would be embraced as Beatlemania and that helped lift America’s morale just 11 weeks after John F. Kennedy’s assassination. The following month, Benson accompanied the Fab Four as they flew to New York City to appear on The Ed Sullivan Show, kick-starting the British Invasion. The trip led to decades of collaboration with the group and, as Benson later recalled, “I was so close to not being there.”