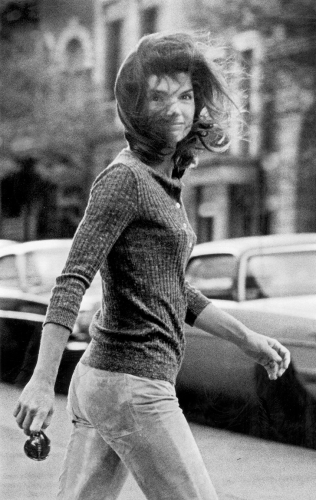 People simply could not get enough of Jacqueline Kennedy Onassis, the beautiful young widow of the slain President who married a fabulously wealthy Greek shipping tycoon. She was a public figure with a tightly guarded private life, which made her a prime target for the photographers who followed wherever she went. And none was as devoted to capturing the former First Lady as Ron Galella. One of the original freewheeling celebrity shooters, Galella created the model for today’s paparazzi with a follow-and-ambush style that ensnared everyone from Michael Jackson and Sophia Loren to Marlon Brando, who so resented Galella’s attention that he knocked out five of the photographer’s teeth. But Galella’s favorite subject was Jackie O., whom he shot to the point of obsession. It was Galella’s relentless fixation that led him to hop in a taxi and trail Onassis after he spotted her on New York City’s Upper East Side in October 1971. The driver honked his horn, and Galella clicked his shutter just as Onassis turned to look in his direction. “I don’t think she knew it was me,” he recalled. “That’s why she smiled a little.” The picture, which Galella proudly called “my Mona Lisa,” exudes the unguarded spontaneity that marks a great celebrity photo. “It was the iconic photograph of the American celebrity aristocracy, and it created a genre,” says the writer Michael Gross. The image also tested the blurry line between newsgathering and a public figure’s personal rights. Jackie, who resented the constant attention, twice dragged Galella to court and eventually got him banned from photographing her family. No shortage of others followed in his wake.