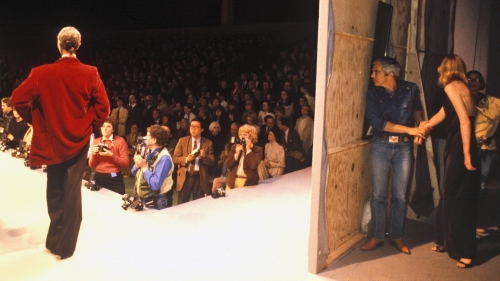 Harry Benson, CBE, has captured some of the most memorable moments of the 20th century. His latest retrospective, on view at the Staley-Wise Gallery from December 12 to January 25, brings unprecedented style to his prominent portfolio. “It’s a huge show,” says Gigi Benson, Harry’s wife and partner of 52 years. “Hopefully, guests will be surprised and intrigued.”

Eschewing the confines of the studio, Behind the Scenes features 90 rarely seen fashion photographs by Benson—and just in time for the photographer’s 90th birthday, which he celebrated on December 2.

“They all have different stories,” says Taki Wise, cofounder of the Staley-Wise Gallery, who shared that discovering these pictures felt like finding an old family photo album. Taken from the 1960s to the 1990s, the photos offer an intimate glimpse into the golden age of American fashion, along with many of the great European designers, and the models, muses, and editors who influenced their work.

“I wanted to show people in their power,” says Benson, who took the images while working for publications like Life, Vogue, Vanity Fair, and New York magazine. With each assignment, Benson went behind the scenes, shooting subjects in their private spaces and professional “war rooms” to communicate their energy and spirit.

There is Geoffrey Beene at home on Long Island, James Galanos at his atelier in Los Angeles, Calvin Klein posing for fans on Seventh Avenue, and Madame Grès on the floor, surrounded by a posse of models. Others, like Benson’s photographs of Donna Karan, show a longer trajectory, from Karan’s early days at Anne Klein to her triumphant turn on Wall Street as her company went public. Benson’s personal favorite is an image of Ralph Lauren looking through a peephole as he studies the audience’s reaction to his 1983 runway show. “I like a photograph to go somewhere and for there to be a story attached to it,” he shared.

Though the subject matter of this exhibition may be different from his more notable photographs, it still embodies life’s fleeting emotion and ephemeral nature, which have become trademarks of Benson’s work. “A good photograph can never happen again,” he says. “To me that’s what photography is—a glimpse, and gone forever.”

Furthermore, the collection examines fashion as a cultural cornerstone, from the iconic designs to the muses who inspired them and the makers who became masters of their craft. While some pictures are 30, 40, or often 50 years old, each still feels relevant, timely, and à la mode. “Harry has that knack for capturing moments,” says Wise. “He has a very keen eye.”

Much like the people portrayed in these photographs, Harry Benson’s own life is a lesson in art and ambition, dedication and drive. As he celebrates his 90th birthday this month, these newly unearthed pictures are a gift to his fans, and a timeless testament to the man behind the camera. 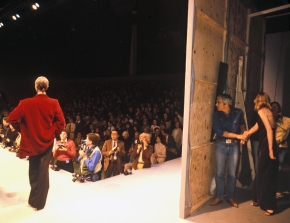