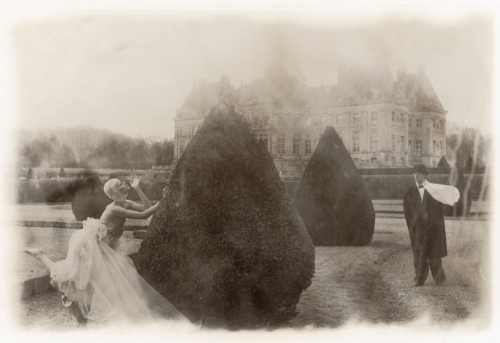 How is it that a photograph of two women wearing two plain white frocks, standing in a winter wood and barely visible amid clouds of ghostly smoke, could serve as such a profound inspiration, a clarion call to the disaffected foot soldiers of the fashion army? “In my pictures, you never know, that’s the mystery. It’s just a suggestion and you leave it to the audience to put what they want on it. It’s fashion in disguise,” the late photographer Deborah Turbeville, creator of this disturbing image, once said.

This picture, and many others from Turbeville’s Comme des Garçons and Women in the Woods photo shoots, are on display through June 10 at the Staley-Wise Gallery in Soho, timed to align the Met’s current Comme retrospective. “I have an instinct for finding the odd location, the dismissed face, the eerie atmosphere, the oppressed mood,” Turbeville explained, and this talent is everywhere stunningly apparent. In one photo, putative children of the damned sport straw boaters; in another, a veiled wraith descends a sepulchral staircase in a Galerie Vivienne passage.

When these images were first published, they represented a radical break in the world of fashion photography, which at the time was pretty much stuck in two trenches: an obsession with sexiness verging on the semi-pornographic, and a sunny inane cheerfulness. Turbeville chose a third path—a haunting hyper-realism, a notion of fashion photography that relied on the mere suggestion of clothing.

Born in 1932, Turbeville was raised in a wealthy, eccentric household in Massachusetts. She came to New York at 20, worked as a house model and general assistant to the iconic American designer Claire McCardell, whom she described as “kind of the Coco Chanel of the State of New York.” Turbeville eventually became an editor at Harper’s Bazaar but it didn’t stick; by the 1970s she was exploring her distinctive vision with her own pictures.

Her life was as distinctive as her art. Etheleen Staley, one of the founders of the gallery that has represented Turbeville’s work for decades, describes her as quiet and intellectual, a reader of obscure books and a seeker of avant-garde films, someone who “didn’t suffer fools.” Her apartment at the Ansonia on the Upper West Side featured one big room that transported you back in time. “You thought you were in Russia planning the Revolution—it looked like a salon in Moscow at the turn of the century,” Staley recalls.

But if that room was perfect, Turbeville’s art was emphatically, deliberately not. “A lot of times there were big mistakes,” she once said, “. . . there would be a strange cropping or one girl in focus and three out or a blur. But I would end up liking the mistakes and incorporating them into my work. And I became known for it.”

Known for it, and beloved for it.