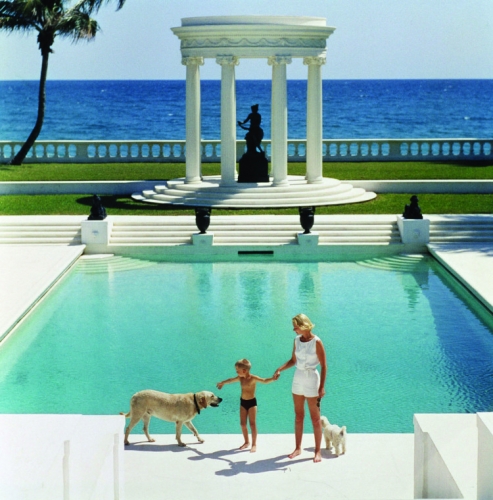 There’s a long history of society portraiture in art, from Ingres’s glossy, idealized images of aristocracy to Goya’s satire-laden portrayals of the ruling class. Few modern artists, however, have managed to capture privilege in a manner as intimate and iconic as that of photographer Slim Aarons, the subject of the exhibition “Slim Aarons: A Man for All Seasons” at Staley-Wise Gallery.
In the postwar boom of the 1950s, ’60s, and ’70s, Aarons captured the jet-set at play in their natural habitats: European hideaways like the Côte d’Azur and Gstaad, and the monied American enclaves of Palm Beach and Southampton. He shot with a photojournalist’s instincts, which he picked up as a combat photographer during World War II. It was after witnessing the horrors of war, in fact, that he decided to turn his lens to “attractive people doing attractive things in attractive places” and vowed to return only to beaches occupied by scantily clad blondes tanning.
With his Leica in tow, the dapper Aarons was accepted into the secretive world of the elite, which he captured with the admiring eye of the outsider in images that graced the pages of leading publications like Harper’s Bazaar,Town & Country, and Life. While working for Holiday magazine, he found his signature style of “environmental photography,” photographing the glitterati as luxury objects themselves, situated within lush environments, that Aarons sometimes exaggerated by careful staging. But despite their polish, Aarons’s images weren’t stylized in the manner of today’s magazine portraits; Aarons shot his subjects as they were, with no makeup artists or wardrobe stylists. “I didn’t do fashion,” Aarons once said. “I did the people in their clothes that became the fashion.”
“Slim Aarons: A Man for All Seasons” is on view at Staley-Wise, New York, May 9th – Jun. 28th, 2014.