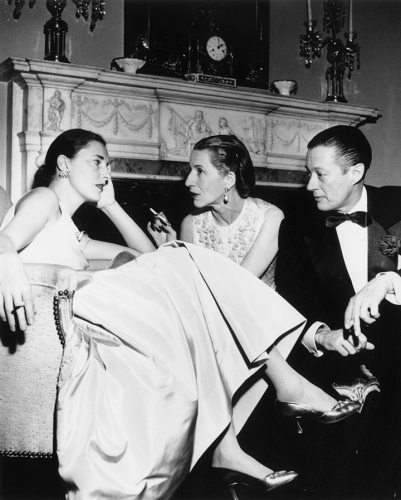 Slim Aarons’s palmy photographs of celebrities, moguls and society molls could be taken for a rarefied exercise in social anthropology, if he weren’t so deferential to the people he portrayed.

“He showed them as they saw themselves,” wrote Etheleen Staley of the Staley-Wise Gallery, where Aarons’s photographs of the beau monde are on view through June 28.

“There’s something about the work that looks especially relevant now,” Ms. Staley said the other day. “A lot of it has to do with our ongoing fascination with the midcentury: the furniture, the people, the movies, the clothes.” That fascination, in turn, owes plenty to Aarons’s glamorizing way with a camera. A skillful documentarian, he drew back the curtain on the playgrounds of the rich and famous, from Palm Springs, Calif., to Park Avenue. “He is the real thing,” Ms. Staley said.

As real, at any rate, as his subjects would permit. There is something almost proudly artificial in Aarons’s Technicolor photographs, in which ski slopes, yachts and swimming pools feature as characters in their own right. But that artifice is at odds with the natural light that infuses his work and that, along with his artful composition, directly or obliquely influences fashion now.

Indeed, it’s easy to imagine that an Aarons effect seeped into Terry Richardson’s photograph in the May issue of Harper’s Bazaar of a russet-haired model poised languidly over a stone parapet. And it’s tempting to trace the provenance of any number of surreally cinematic shots in the fashion glossies to Aarons’s “Poolside Gossip” (1970), in which immaculately turned-out society women lounge on the deck of a Richard Neutra house in Palm Springs.

Aarons, who turned from wartime photography to society portraiture in the 1950s, affected offhandedness throughout his four-decade career (he died in 2006). He was a man who, by his own account, just wanted to have fun. “Ninety-nine percent of my contemporaries kept on reporting about the miseries and worries of the world after the war,” he once said. “But hell, someone had to do the other stuff.”